A little bit of everything.

I have been absent from this blog for a while. In fact, this is only my seventh post this month. My excuse for this is work or what I do at work which is sit in front of a computer doing a little bit of editing, instructional design, and writing.

After I get home, I am not particularly inspired to write anything meaningful to post here. So I end up sitting in front of the television watching whatever happens to be on that night or in front of the computer catching up on various sites I frequent.

So my life has been, for the most part, uneventful. That is until yesterday morning when a woman in a white Chrysler van on her way to the gym decided to crash into my parked car. The collision demolished my trunk and almost pushed my car into my neighbor's van.

Now I have to sit at home on Monday waiting for the claims adjuster to tell me that my car is junk. I hope that this will not be the case since it only has 141 thousand miles on it. It's a 1999 Acura and for a ten year-old Japanese car that kind of mileage is nothing.

In the commotion with the car, I almost missed the twentieth anniversary of my departure from the Soviet Union. I did call my Dad to remind him about it, but it was spoiled by telling him that my car, which used to be his, may now be scrap.

It is in times like these that I long to live some place with off street parking and public transportation. Now I have to start thinking about possibly getting a new car. Argh!
Posted by Stan Yann at 10:05 PM 0 comments

I have read many blog posts on the topic of using Twitter to increase your productivity. One thing that all these posts had in common was that they directed the reader to follow GCal, or Google Calendar, on Twitter. This would allow you to send direct messages to GCal in order to update your Google Calendar.

This is extremely redundant since most Twitter posts and direct messages are made from cell phones. And GCal already has a mobile option. You can activate it by clicking the Mobile Set-Up tab in the calendar settings.

The number is 48368 which spells GVent. When you send text messages to GVent, a new event is added to your calendar and you receive a verification text message from GVent.

And if you post on Twitter from your computer, there is no need to follow GCal because you can easily open Google Calendar in a separate window or tab. So the answer to the question "why follow GCal on Twitter?" is why would you.
Posted by Stan Yann at 2:08 PM 0 comments

Twitter has been getting bigger and more popular lately. It seems that anyone who's anyone, which means pretty much everyone, is on Twitter.

The only problem with following these people, if they are who their mini bios claim to be, is that they don't follow everybody who follows them. Following somebody who follows you is a matter of politeness.

I guess once you achieve success, politeness becomes an unnecessary concept. This is sad since it is so easy to be polite to people online.
Posted by Stan Yann at 12:03 AM 1 comments

Today is a Buddhist holiday known as Nirvana day. It is the celebration of Buddha achieving Nirvana after the death of his physical body. So here is a little lithium to help you achieve Nirvana. 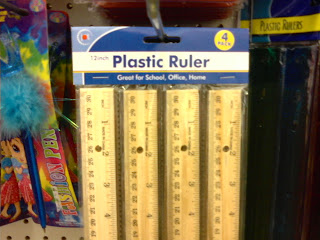 At first glance it would appear that you are looking at a plastic ruler. But after taking a closer look you discover that there are four of them. And then it dawns on you that actually they are made of wood. At this point words fail you as they did me.
Posted by Stan Yann at 8:55 PM 0 comments

Here is what Wikipedia has to say about Eagles Mere. And this is the village's own website.
Posted by Stan Yann at 12:27 AM 0 comments 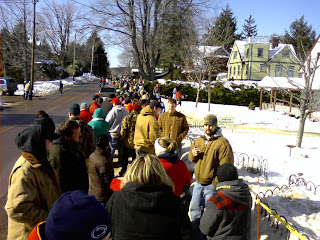 Today we took Lili to Eagles Mere to ride on the Eagles Mere toboggan slide. The worst part of the whole experience was standing in line which took about two and a half hours. That could have been a lot worse if the temperature wasn't above freezing.

To ease the mindless standing around, a local civic organization provided some snacks at a very low price. However, to get these you had to stand in another, much shorter, line. The price of the toboggan rentals wasn't bad either. $15 got you a small toboggan which sits six people. For $20 you can ride with seven of your friends or have some room for your stuff.

I have to admit that I had some trepidation about riding down an ice slide onto a frozen lake. These had more to do with the hill and the speed of the toboggan than the possibility of the ice breaking under us. Some part of my mind figured out that if the unusually high temperature made the ice unsafe to ride on, the people running the slide would have closed it down. But this did not become readily obvious to the rest of my mind which was too busy being gripped by irrational fear.

After the initial ride my fears were replaced with exhilaration which eventually gave way to exhaustion as we dragged the toboggan back up the hill. The whole experience was quite pleasant and despite the long lines was a better use of our time than sitting at home watching the pregame show would have been.

Everybody, including Lili who always denies that she had any fun, enjoyed themselves emmensly. Eagles Mere is a nice little village made up of a large number of summer homes and quaint shops with helpful shopkeepers. If you get a chance to visit Eagles Mere, you won't be disapointed by it.