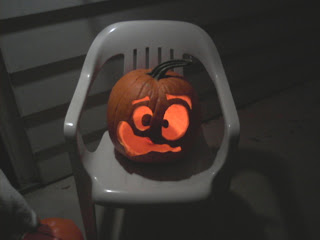 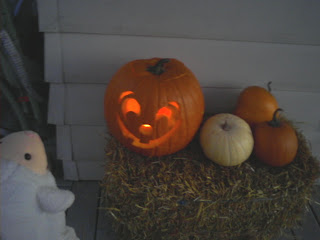 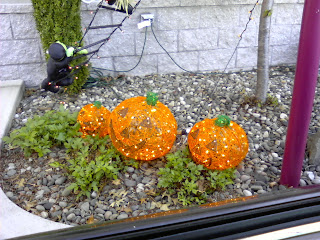 My local Dunkin Donuts always decorates for Halloween.
Posted by Stan Yann at 11:36 AM 0 comments

It's 1 am on October 31st and I am writing this as the television set behind me plays Ace of Cakes. Yes, folks, instead of Count Dracula, or Frankenstein's Monster, or even, my favorite horror character, Freddy Kruger scaring me out of my wits in the wee hours, I hear the cheerful voice of Chef Duff Goldman.

I have my wife, who loves the Food Network, to thank for this. But I have to admit that it is fun to watch people cook dishes you have no desire or ambition to even attempt. Although, maybe watching Ace of Cakes is a better idea than watching a horror movie. Since watching one late at night is similar to eating right before bed because both will give you nightmares. And who wants to have nightmares on Halloween. :-)

But since it is Halloween, this post should include something related to this wonderful holiday. So, here is a little Monster Mash for all you ghouls. :-)

I am not Joe The Plumber.

There is a McCain ad I keep seeing on TV that bothers me a bit. This ad plagiarizes the Microsoft "I am a PC" commercial which in turn parodies Apple's now famous PC vs Mac commercials. It starts with a clip of Barack Obama talking to Joe The Plumber and telling him that he wants to "spread the wealth." Then it shows person after person saying the phrase "I am Joe The Plumber" into the camera. I tried, quite unsuccessfully, to find the McCain ad on YouTube, but I did find the Microsoft one. Enjoy.
Posted by Stan Yann at 11:23 AM 0 comments

I haven't posted in a while. That's because I've been sick. And when you're sick, it's hard to think or to blog. It is also hard to think of ideas to blog about which results in complete lack of new posts. Heck, I haven't even kept up with Twitter as much as I normally do. If you expected to find pearls of wisdom on this blog, and instead were greeted by an absence of new posts, now you know the reason.
Posted by Stan Yann at 11:49 AM 0 comments 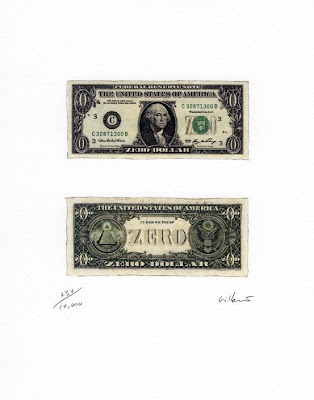 This is a print by Laura Gilbert which she will be distributing for free during her exhibition at the Grady Alexis Gallery in NYC starting October 24th. If you get a chance check it out. For more information you can go here.
Posted by Stan Yann at 8:08 AM 0 comments

This story is from the October 4th issue of the New York Times, but I just got my hands on it recently. A descendant of the original Maverick is enraged by McCain being referred to as a maverick.
Posted by Stan Yann at 8:34 PM 0 comments

The bad news is that the stock market took another plunge as Dow dropped below 10,000. On the other hand, the oil price is now below $90 per barrel which means that the gas prices will go down. It seem that every cloud does have a silver lining.
Posted by Stan Yann at 11:51 AM 0 comments

This story out of Massachusetts is a bad omen. It seems that the number of homeless families there has increased dramatically in the wake of the economic downturn. There are so many homeless families that the state is forced to put them in motels because the shelters are filled to capacity.

As a somebody who is looking for a full-time job, I can relate to what these people are going through. I am worried that the economy will take another nose dive and the $700 billion bailout package will not be sufficient. But I also hope things will turn around soon. We'll see.
Posted by Stan Yann at 11:34 AM 0 comments 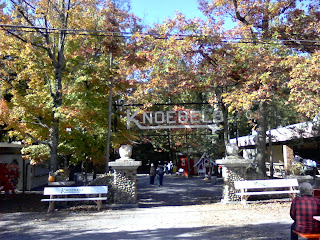 When this season started I was rooting for the Chicago Cubs because this year marks one hundredth anniversary of the Cubs' last World Series win. If you read this blog regularly, you know that I am a New York Yankees fan, but I couldn't resist rooting for the underdog.

And it's hard to find a bigger underdog in all of sports than the Cubs. Compared to the winless century, the Red Sux 86 year winless streak is nothing to write home about. And now it might be 101 years before the Cubs win another World Series, making this the longest slump in the history of sports.

On the other hand, the LA Dodgers who eliminated the Cubs were led this season by Joe Torre. His old team, the Yankees, didn't even get into the postseason which it has done repeatedly with Torre at the helm. I wonder if Steinbrenner will replace the current manager after such a dismal performance this season. Also, with all the controversy surrounding baseball lately, I am looking forward to next year for more sports and less soap opera. Let's see what happens.
Posted by Stan Yann at 10:12 AM 0 comments

I didn't watch SNL last night because it stopped amusing me years ago. But this hilarious take on the VP debate is one of the few SNL gems I have seen lately and it's definitely worth watching.
Posted by Stan Yann at 9:46 AM 1 comments

As soon as the curtain went down on debate between Joe Biden and Sarah Palin people started arguing about who won. Myriads of pundits and political strategist gave their opinions and analysis to reporters on countless channels. Billions of bloggers wrote play by play and quote by quote responces to each answer and gester.

But in the end, no matter what was said about what was said, only the voters themselves should decided who won this debate. Because in a month, when you stand in that voting booth getting ready to put your $0.02 down on a presidential candidate, all the pundits and analysts won't matter. You won't even remember what was said and by whom.

If you want to know what I thought, I will tell you. I thought that Palin did a good job keeping afloat. She didn't answer any questions to my, or my wife's, satisfaction. She insulted every beer drinking American by calling them "Joe Sixpack" and that folksy "you betcha" just made her sounds like Tina Fey doing a really bad impersonation of a Canadian on Saturday Night Live.

She also refered to herslf as a "hockey mom" which is a wonderful thing to have on your resume when you are running for PTA president at your kids' school, but it doesn't even come close to cutting the mustard where being Vice President is consurned. If McCain is elected President, this woman is going to represent the US throughout the world on official state visits. This idea is scarry considering her only foreign diplomatic experience is beign the governor of a state that has a border with Russia.

I could tell you who I thought was the clear winner, but I wouldn't want to influence anybody or start an arguement. But what I am going to tell you is that with a month left until the election you need, no you must, pick a candidate and soon.
Posted by Stan Yann at 10:33 PM 0 comments

Andy Borowitz, a comedian who wrote McCain Replaces Palin with Startled Deer story I previously wrote about, has done it again. It seems that Palin's answers in tonight's debate were brought to you by Mad Libs.
Posted by Stan Yann at 10:52 PM 0 comments

Here is last night's Top Ten list from the Letterman show. I find it to be sad, but true.
Posted by Stan Yann at 10:03 PM 1 comments

Just in time for the debate between Joe Biden and Sarah Palin, I received an email from Simon Owens, of Bloggasm, pointing me to C-SPAN's gift to Web 2.0 and political junkies everywhere, Debate Hub. The way the Hub works, and makes the debate more interesting, is by gathering all relevant and irrelevant information from blogs and sites throughout the strands that make up the World Wide Web. This is a very interesting experiment which provides an experience of the presidential debates that you can only get from the web. Gizmodo did a nice, little write up on the Hub.
Posted by Stan Yann at 7:42 PM 0 comments

Melamine, an industrial chemical which poisoned thousands of Chinese children, has made its way to the United States and into some candy sold in Connecticut. I understand that large companies need to make products in China in order to increase their profits. But what doesn't make sense to me, as a consumer, is why aren't there more safeguards and controls in place to assure that this kind of thing does not happen again.
Posted by Stan Yann at 3:53 PM 0 comments